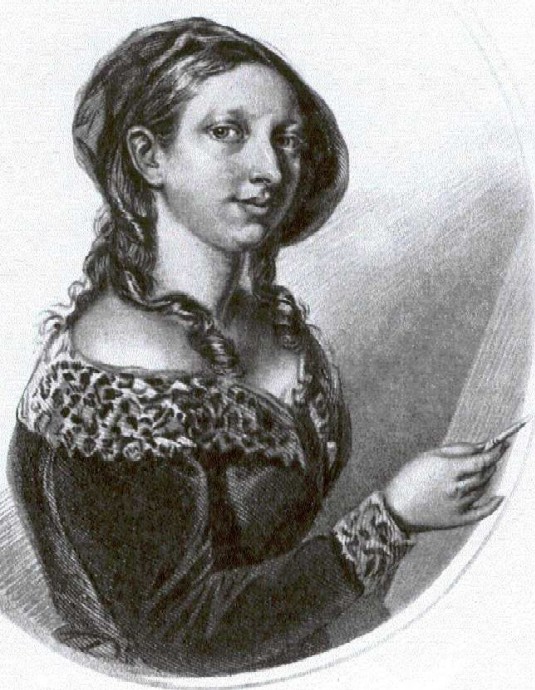 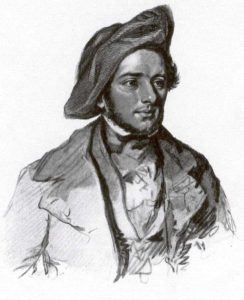 Alexis Soyer drawing by his wife Emma Jones, Circa 1834

Elizabeth Emma Jones was born in London on 5th September 1813. Her parents were Richard Jones and Elizabeth Newton. She had an older brother – Newton Jones – who was two years older than her. Her father was simply recorded as a ‘Gentleman’ died in 1816 when Emma was just three years of age. Richard’s will was very straight forward he left everything to his wife, Elizabeth. I have found researching this family very difficult, I have not been able to find Elizabeth or Emma deaths in the BMD. All I know about Newton Jones was that he married an Elizabeth Clarke 7th October 1830 at St Martin’s in the Fields Westminster, London. One of their witnesses was Charles Parks who witnessed all the marriages that took place that day. In the 1841 census he and Elizabeth were living at Redcliffe Highways and he was a tobacconist. No children are recorded. In 1851 Census he and wife are recorded living at 16 Belvedere Road. Newton is now called a confectioner. However, his wife’s name is recorded as Mary Jones, from the City of London, age 30 ten years younger than Newton. Whereby Elizabeth was the same age as Newton. In the 1861 census, he and Mary are still living 16 Belvedere, but three further people are also recorded living there. Newton trade is recorded as a warehouse packer. So, he must have fallen on hard times with his trade and having lodgers. Newton dies in 1862. 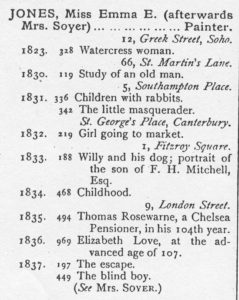 Elizabeth made it her life’s work to support Emma, who was a very precious polymath. By the age of 8, she had mastered Italian and French. Her two major loves were playing the piano and painting. Her mother employed Jean Ancot to give Emma piano lessons. When Carl Maria Von Weber was invited to listen to her play, he declared she had a brilliant career ahead of her. However, also at this time (1817) Emma Mother’s asked the celebrated artist Francois Simonau to mentor her daughter, it quickly became clear that painting was going to be her passion.  Elizabeth Jones nee Newton spent so much time with her daughter’s mentor that she married him at St Mary’s Church, Lambeth on 23rd October 1820. Emma quickly became on par with her mentor. At the age of 10, Emma became the youngest person to have a painting on show at The Royal Academy Summer Exhibition with a painting named ‘Watercress Woman’. However, the title was taken away from her in 2010, another 10-year-old Felix Chadwick Histed submitted a painting called ‘Trees’. Simonau first submitted a painting 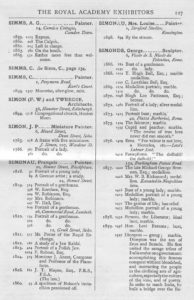 in 1818, he submitted 16 in all to the Royal Academy Summer exhibition. His last submission ‘A Specimen of Nelson’s Invincibles Pensioned Off’. This was shown in the 1860 Summer Exhibition, yet Simonau died 26th November 1859. Emma as Jones and Soyer exhibited 14 paintings at The Royal Academy Summer Exhibition. 28 Painting at the British Institute, British Institution for Promoting the Fine Arts in the United Kingdom to give it its full name. It was at 52 Pall Mall, the same road as The Reform Club and again in Pall Mall, she showed 14 paintings at Suffolk Street Gallery, the correct name Royal Society of British Artists, Suffolk Street, Pall Mall East. It is thought she produced some 400 pieces of work during her short like time. In a Times article 16th August 1842, claims “Cut off at a moment when her reputation was about to make her fortune”. It also claimed that her style was like the Spanish baroque painter Bartolom Estaban Morillo 31st December 1617 – 3rd April 1682. 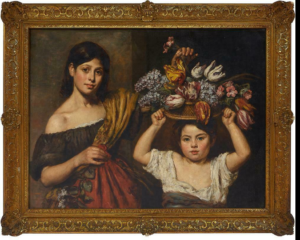 In ‘Memoirs of Soyer’ it is written that as Madame Soyer was gaining renown, she wanted to exhibit at The Royal Academy but was rejected. They even show a letter from Sir Martin Shee dated 13 April 1840, (president of RA 1830-1850) explaining he can’t help with Emma’s submission. Memoirs state “Of course it will be obvious to English Readers that Madame Soyer and her husband acted as unaware of the rules of procedure at the academy”. As the main actors Alexis, Emma and Francois were all deceased when “Memoirs” was published 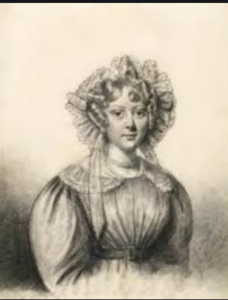 (1859) there was no one to contradict this statement, as you can see by the two images these were paintings that were exhibited in the Summer Exhibition at The Royal Academy. Even the year she married 1837 two of Emma’s paintings -The Escape and The Blind Boy were being exhibited at the Royal Academy.

Sometime during 1835, Alexis fancied having a portrait of himself commissioned. During this time, he was working for William and Louisa Lloyd (Louisa nee Harvey was a direct descendant of Dr William Harvey royal doctor to Charles I and II and to James I as well. He also discovered the circulation of blood). The Lloyds whose main pile was Aston Hall, nr Oswestry, Salop and their London House was in Great Cumberland Street, Mayfair Alexis spent most of his time at the London House. [Author’s note: it was around this time that the three brothers were all in London, Louis was staying with Alexis at Charing Cross Road and Philippe had a house in Wilton Street].

Although Alexis was quite vain, I doubt if the portrait was for himself. It could 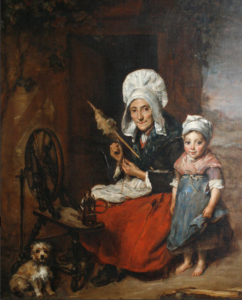 The Grandmother and her spinning wheel Emma Soyer

either be for the girlfriend he left behind in Paris, Adelaide Lamain, or for his mother (Alexis father had died 20th August 1818) who had remarried to Pierre Travets 22nd June 1819 in Crecy. Philippe died at his mother’s house 27th March 1839 and when her husband Pierre Travets died 19th May 1843. She went to live with Louis, sadly for her, she saw his death as well on 17th May 1844. Marie herself died 29 Jan 1845. This does show the Soyer men were very close to their mother. It is unknown how he knew about Francois 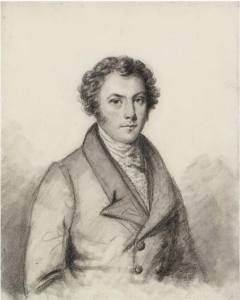 Simonau, but this was the artist he wanted to commission and he went to his studio in Fitzroy Square London and François readily accepted and then introduced Alexis to a very attractive young lady who was sitting at an easel painting. Simonau introduced his stepdaughter Emma Jones and it appeared both were smitten from that meeting. Alexis was delighted when Emma responded to him in French. Alexis made an appointment for his first sitting and left.

When Alexis arrived for his first sitting, he was introduced to another Frenchman, it appeared Simonau had noticed the attraction that Alexis and Emma had for each other and was using the Frenchman as a ‘spoiler’ – it did not work. In ‘Memoirs of Soyer’ it is written that on Alexis second meeting with Emma he proposed, I have strong reservations about that statement. The only true freedom that a woman had during these days was the fact she was single, as soon as a woman got married she became a chattel of her husband, everything she owned such as money and property would now belong to her husband. In Emma’s case that would mean all her past works and future works would belong to Alexis, that any money she earnt would belong to Alexis. (author’s note: before 1857 and The Matrimonial Causes Act to get a divorce, which would allow you to marry again needed an act of parliament. Hence why Francesca Cerrito and Alexis married in France.) Emma was very intelligent and would be aware of this I think she would have taken her time to find out what sort of person Alexis was. There was no need to 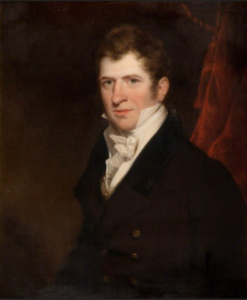 worry Alexis was more than happy to help further her career and accepting Emma’s need to tour the country looking for figures to paint. Emma and Alexis Married in St George’s Church Hanover Square, London on 12th April. Alexis’ best man was Louis Eustace Ude. Considered to have been London’s top French Chef until Alexis Soyer stole his crown. Also, on that day Lord Marcus Hall, chairman of the Committee at The Reform Club was married, which Alexis took advantage of with his various disputes with the hierarchy at the Reform Club during his tenure.

Sadly, for Emma and Alexis, their time together was just five years. In 1842 Emma died. Although her death was recorded in several newspapers, I have not found a death certificate or an entry in any public research facility. It is unclear what her death date was. According to ‘Memoirs of Soyer’ it was 29th August 1842. All the newspapers gave 30th August as her death date, but on Faith the Monument at Kensal Green it claims 1st September 1842. Some authors claim that she died of childbirth, again there is no evidence of that. Emma was pregnant but we do not know by how many months, according to Francois Volant on Memoirs of Soyer he claims: “A terrible thunder-storm came over London in the evening of the 29th which so alarmed Madame Soyer that she was prematurely confined and died the same day”. He also goes on to write “A letter was dispatched to say that she was prematurely confined and that both she and the child were very unwell”. (there is no evidence that a child had been born, there is no death registration for a child, and neither is there a child buried with Emma. I sometimes just despair at Volant’s constant attempts of trying to show the reader of 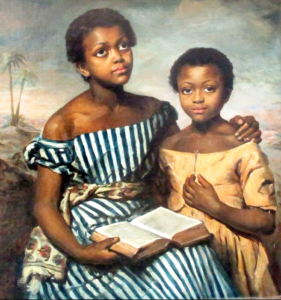 Memoirs of Soyer that he was a close personal friend of Alexis Soyer). I do have some difficulties with these statements. Severe thunderstorms only took place in London on 25th August 1842, so at least, she must have been confined to her bed for three/four days. The weather in London on 29th August is reported as clear with a moderate wind. Volant claims he left England on the 30th to tell Alexis that his wife had died. 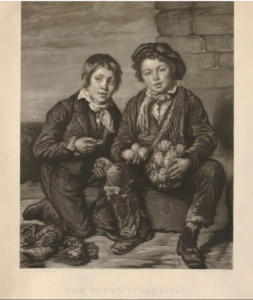 The Young Israelites. This was the painting Emma was working on just before she died.

Just prior to Emma’s death a group of V.I.P visitors came to the Reform Club. They wanted to meet the Great Soyer and see his kitchens. Alexis was only too pleased to do so. One of these visitors was the Duke of Saxe-Coburg and Gotha, who was the father of Prince Albert, Queen Victoria’s husband. Who on seeing Emma’s paintings was so taken with them, asked Alexis if would accompany him to see his younger brother who was King Leopold of Belgium? He claimed King Leopold was a great art collector and would love to see some examples of Emma’s painting. Alexis was very hesitant about this, but Emma encouraged him to take the trip, which is why Alexis was not with his wife when she died. Alexis and Volant arrived back in London on Saturday 3rd September 1842. On the Monday 5th September 1842 he brought a grave plot at Kensal Green Cemetery, on 15 November 1842 he brought some more land around Emma’s grave increasing the size to ten foot by 8 foot and finally on Wednesday, 24th April 1844 he brought more land increasing the plot to twelve foot by twelve foot he had done this so the monument he had designed for Emma would fit. 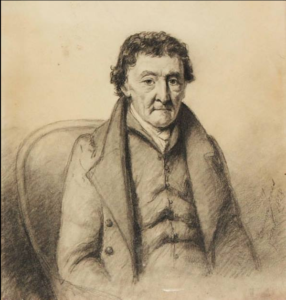 had the name Emma Soyer carved into. The monument was placed over Emma Sunday 28th July 1844 and was widely reported in the newspapers. One of the reasons was because Alexis was accompanied by someone that Emma would not have been pleased that they were there. Her name was Francesca (Fanny) Cerito, a leading ballerina of her time and later to be Alexis second wife. See “Alexis’ relationship with Francesca Cerrito”. Double rr is the modern way of spelling Cerrito and Alexis’ time it was ‘Cerito’, 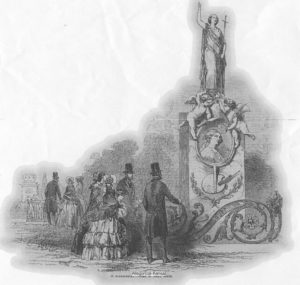 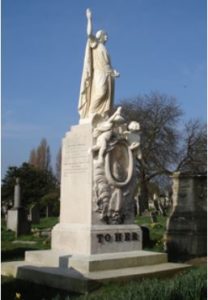 Drawing of Roger’s railings at the V&A.